The historic research in support of the writing for the TV series, Boycott reveals the critical role the events of the 1902 Boycott played in shaping the course of U.S. business, history, politics, literature, and popular culture of the day during the last breaths of Gilded-Era America, and its remarkable [and never-before recognized] prominent impact through present-day society.

The 1902 Kosher Beef Boycott was the birth of female-led social activism; the strength and strategies of these women remain powerfully evident in contemporary America. Credit is due to that first movement and two women – Fanny Levy and Sarah Edelson – whose indignant spark against one of the nation’s most potent business monopolies – The Beef Trust – transformed their generation, and all others that followed.

The Boycott, as reported in the papers of the day, began on Wednesday, May 14th, 1902  and ended around June 3rd. Although for the television series, the focus of attention is on about two weeks from the commencement of the boycott, which during the research revealed one of the two actual inciting incidents, Sunday, May 11th.

Fascinated by the event, [of the Boycott] I commenced a journey to learn more about it. In so doing,  I discovered, unmasked rather, significant previously-unconnected incidents that I believe offers an exciting, new, nuanced, and compelling historical/academic narrative.

As will be seen, the 1902 Kosher Beef Boycott played a remarkable, but unrecognized role in the entirety of U.S. history on a multitude of levels impacting Americans and America, not just during the immediate three-weeks during which the boycott unfolded, but for decades that followed.

This research, compiled in the writing of the television series, reveals a remarkably clear connection and unmistakable association with actions, behaviors, and decisions [likely never before seen in the totality of this light, based upon the historical observations expressed below] of President Theodore Roosevelt and various public policies he would take. 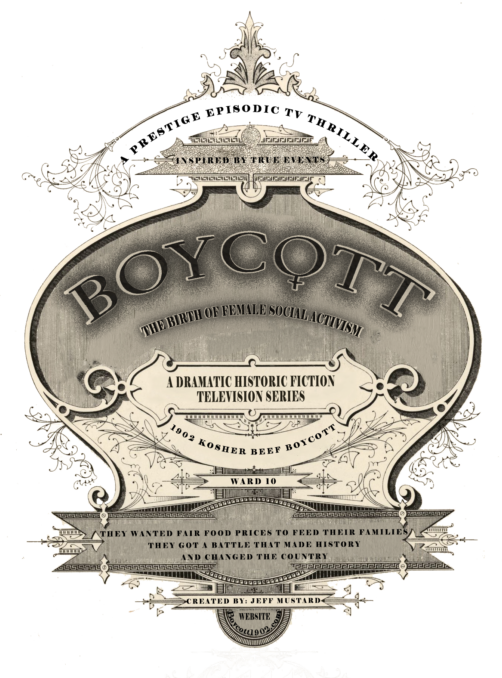