There are two “Boycott” projects. One is the Limited Series tv show – six one-hour episodes. The multiple award-winning pilot script is written for this show.  The TV series stands on its own as a project we wish to see produced, and available on cable or streaming platforms.

As a prestige, historical-fiction, period thriller, the “Boycott” TV series delivers exciting, compelling and multi-layered, familial and intergenerational storylines. At the core of this four-quadrant, top Bechdel rated series is the female co-leads – Fanny Levy and Sarah Edelson, living lives of toil and tedium set in an extraordinary time and place – New York City, Lower East Side at the turn of the 20th Century.  At this time, the Lower East Side is being flooded with Eastern European immigrants – most notably Jews, Italians, and the Irish. These groups and others were giving shape to what would become the human capital foundation of the burgeoning country.

A Limited Series Spin-Off is already envisioned, using, of course, characters with whom the audience is invested, and with whom there emotional resonance – specifically, the “children.” The spinoff picks up about 10 years later, still in NYC, with the kids, now young adults, working in the garment trades, at arguably, the pinnacle of New York City’s emergence as a leader in the garment industry. Like the original series, the spinoff is grounded in historical facts and inspired by real-life incidents of the day – incidents of national significance.

The videos below were produced as part of the musical recording process that took place over nine months. Jeff Mustard concluded that the Boycott TV series had all the ingredients for a musical stage play – visually rich, but also limited sets – a manageable cast – and a captivating story.  With this in mind, and fiercely inspired by “Hamilton,” Mustard proceeded to write lyrics, braiding fiction and non-fiction elements into the musical compositions. The result is six songs comprising a little more than 60 minutes of music that, according to Mustard’s vision represents the first Act of a musical stage play.

The “official teaser video” provided below AND ALL OTHER videos – all music-driven – are representative of the hip-hop oeuvre, and speaks to a commercial, and wide, family-friendly, demographic.

Below are four song teaser videos. These are approx :60 cut downs of the actual “Full Length” promo trailers of each song.   The Full Length Promo’s vary in length from 3:14 – 4:21

At 80 BPM, “Barons Beware” is at the entry-level vibe of a mid-tempo song representing a pivotal aspect of the Boycott story. It is the moment when Attorney General, Philander Knox apprises President Theodore Roosevelt of the Kosher Beef Boycott unfolding in New York City’s Lower East Side. While fighting in the Spanish American War in Cuba in1898, Roosevelt’s troops suffered from grave illness, and even death, after their consumption of toxic beef. For a theatrical stage version, this monumental scene provides historical insight, as well as the personal nature of the powerful and negative impact the “Big Six Cattle Barons” had on the lives of Americans.

This rhythmic but down-tempo number is a speak/sing duet, delivered at the slowest BPM for the entire album. “Step Aside” reflects the terse intensity that exists between Fanny and Ezra, her husband. The marriage of lyrics and downbeat tempo powerfully reflects this tension, amplifying the strife lurking beneath the surface between the couple, owing to Fanny’s involvement in the Boycott and Ezra’s frustration and resentment for her “instigation and continuation” of such events.

“Fanny’s Fury” is a critical and pivotal song in the show. It follows “Step Aside,” which is the first time Fanny has not only challenged her husband’s demands, but she also defies his command not to leave their tenement home. Yet, she does. This song represents the second stage of her personal transformation and character growth arc. [The first occurring in the prior song, “Step Aside.”] This arc reaches its apex during this song’s conclusion, at which point, Fanny AND her sister protestors are all “transformed,” emotionally and internally, now powerfully in touch with their newly discovered enlightenment. The lyrics reveal their feelings: “Our voices heard, no longer mistreated, no longer scared, our feelings buried deep inside, so long try to hide, from the world outside.”

This song is the final number of the “proof of concept,” performance of the mostly “music-driven” preview live stage show. This number, “More in Store,” serves various purposes: First, It’s a highlights recap of the fantastic historical insights relative to the incidents of the 1902 Kosher Beef Boycott. Second, it takes the audience on a musical journey reflecting the show’s time and place. Third, it offers stunning perceptions into president Roosevelt’s vital backstory before his ascendency as the nation’s Commander in Chief. As revealed in the storyline of the show, just barely four years earlier, Roosevelt volunteered as a Rough Rider to lead the nation’s cavalry aiding Cuba in its fight for independence in the 1898 Spanish American War. The importance of this incident cannot be overstated, not just from a historical perspective, but to gain a unique understanding of President Theodore Roosevelt’s impulse to confront the nation’s powerful Beef Trust. 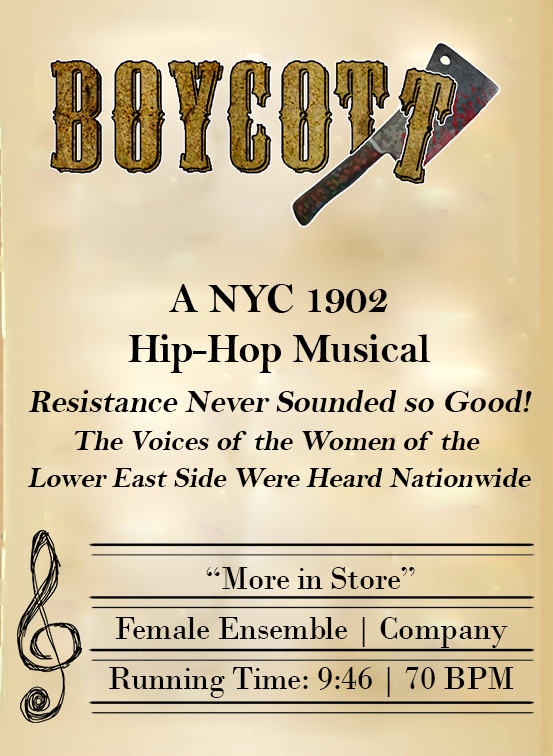 These are the Four Full-Length Music Videos. The running time on each vary, however, they range in length from 3:14 to 4:32

Hamilton-Inspired Hip-Hop Song — “Too Much Greed” Sets Time and Place of New TV Series, “Boycott” — A One-Hour, Scripted, Dramatic, Limited-Series, Historical-Fiction, Period-Thriller, Set in NYC, Lower East Side, 1902. The song, written and produced by tv show creator, Jeff Mustard, the four-minute piece is set to an ultra-contemporary hip-hop/rap beat. The track is the (potential) Opening Number for an adapted version of his tv series envisioned as a musical stage play: “Boycott”: A NYC 1902 Hip Hop Musical. Mustard wrote and produced six songs, comprising more than 60 minutes of music. The tv series, inspired by the real-life events of the 1902 Kosher Meat Boycott, is written as a dramatic thriller and does not include music. The six-song album, out soon on Spotify, represents the first act of the Integrated Book Musical Stage Play.